Our Day in NOLA

So Jill and I decided to spend a day in the French Quarter, seeing as though we leave for the cruise tomorrow morning. We knew the Bayou Classic was in town and started at 1pm so we delayed our trip slightly to try and avoid the mass hysteria of College Football Rivalries. After not being able to find the bus stop due to the lack of sign, we decided the 2.2 mile hike isn’t too bad to hoof it (turns out the trip there wasn’t so bad, it was the trip back that was the pain).

After our stroll down to the Riverwalk Shopping Plaza we wound up looking for a souvenir Christmas ornaments in some holiday theme shop. Oddly enough, there was a ton of U of M gear along with the mass of LSU stuff. Oddly enough, very few Buckeyes, which we were OK with. 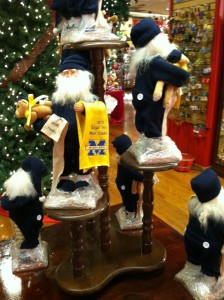 At least there were no OU Nut crackers.

Near the end of the Riverwalk we found this amazing little comic book shop called “Red Rocket Comics”. Now, we may have only walked out with a Onise and a few laughs, but this place is legit. The guy working knew his stuff too. I had a hard time not spending a lot of time and money in this place. We did find this ‘Bazinga!’ onsie and also a onsie that we figured was not a great idea to give your own child. 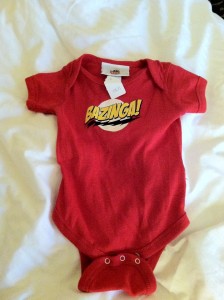 Our child will be the coolest kid ever with this. 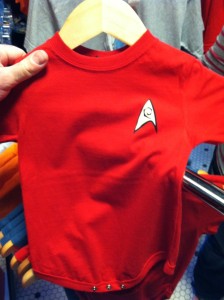 If you put your child in this, you have some questions to answer.

After what seemed to be forever, we started to get a little hungry. By a little, I mean HUNGRY. We were headed the direction (or so I thought) of Café Du Monde, over in the French Quarter French Market area. Once I choose the correct location for Apple Maps to direct me to, we were truly on our way. I wish I had an actual picture of the beignets that we got, but they didn’t actually last long. Let’s just say they were the perfect little squares of deep fried, golden brown, powdered sugar covered, dough you can ever imagine. I did get a shot of the To Go Order line. It wrapped around the side of the building, and was about 15 minutes long. Yep, they are that good. At about $3 for 3 beignets, it’s well worth the wait and cost. 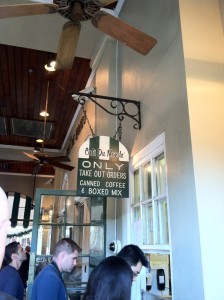 After we grabbed our food and ate on a bench along Decatur St. we strolled down into the Art District and French Market.

The atmosphere here is kind of interesting as it’s a mixture of restaurants that have walk up bars, a farmers market, some art shops, some gift shops, and a few locations that I wasn’t really sure what they did, but wasn’t about to go in to find out. Seeing people openly walk around with a beer was a little strange at first, but as it’s frequent you get used to it.

We had already figured out what we wanted to do for dinner, so we were going to grab lunch while we were here. We walked around a block that had a Margaritaville, thinking that could be our last resort. Jill spotted the Louisiana Pizza Kitchen and suggested it as we didn’t quite get to fulfill my pizza craving from the prior night (or every night since I love pizza).

The place is small just like everything else there. I asked our waiter to suggest one of the local beers on the menu and he recommended the Abita Winter Ale. It was great. Honestly better than any mass market Winter Ale I’ve ever had and half the cost. Win, win. To test any pizza place I always just get their plain cheese. Great choice as their cheese was fantastic. 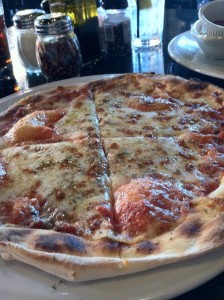 “A delicious cheese pizza, just for me.” – Kevin McAlister

After pizza it was time to start heading back to the hotel and grab dinner to go on the way. Dinner is a sandwich called the “Muffuletta“. I can’t do it justice, just click that link and you’ll see what I mean. It’s currently in the fridge, waiting to be devoured by us. The place that claims to have the “original muffuletta” is a place called Central Grocery on Decatur St. It’s a classic grocery store with wooden shelves and what looks like product that’s been on the shelf for 50 years. 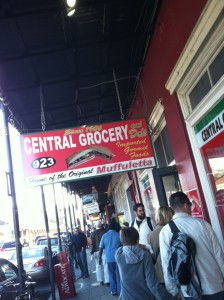 After that was a 2 mile walk home and along it we saw some interesting shops, interesting people, and amazing old architecure, including old St. Patrick’s church on Camp. The bells kept ringing in the bell tower and because of the buildings around it just echoed, and echoed, and echoed. It was hard to tell if it was the echo or the actual bells at times. 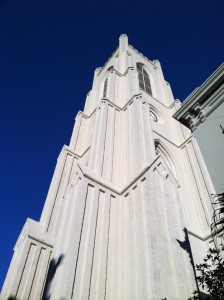 Looking up at the bell tower of St. Patrick’s.

So that was our day in the French Quarter. We walked a lot and saw some amazing places. Here’s some more pictures I grabbed while waking around. 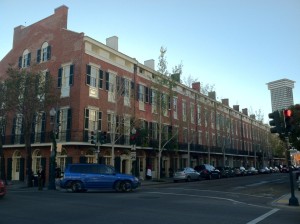 A carriage house looking building that I found interesting. 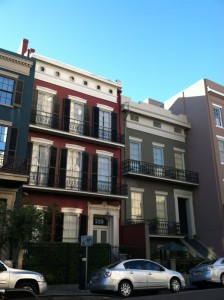 This home was across from St. Patrick’s. I don’t think I could handle the bells. 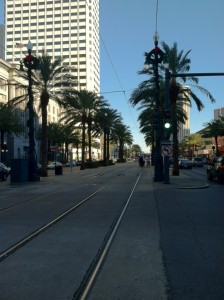 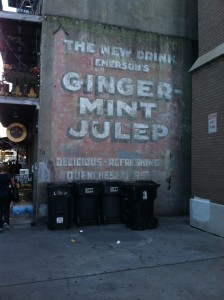 An old advertisement painted on the side of a shop on Decatur. 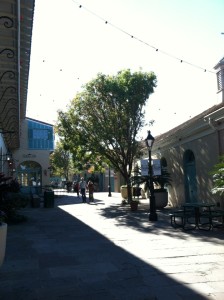 The Art Gallery area of the French Market.